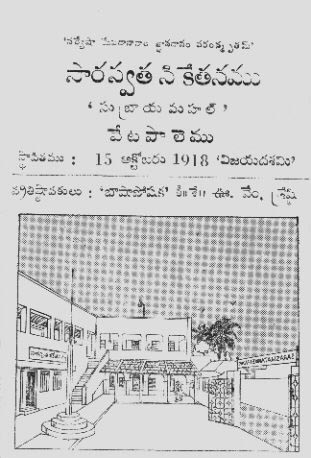 Besides being famous for its fine Cashew Nuts, this small town is home to a treasure of telugu literature. If your search for a telugu book has been unsuccessful so far, chances are that you will find it in Vetapalem Saraswata Niketanam. And, thats no exaggaration.

Inspite of its wealth of telugu literary collection, and over 80 years of collossal service to the telugu cause, it remains largely undiscovered even among litterati. One still hears questions like, Where is this Vetapalem ?

Vetapalem is in Prakasam District of Andhra Pradesh in India on Tenali-Madras railway line, close to the eastern sea coast. A few trains stop in Vetapalem. It takes half an hour to reach Vetapalem by a city bus from Chirala.

Interesting thing about this library is that since its founding in the pre-independence era in 1918, it has remained a private, family-maintained library. A rare institution of its kind in Andhra Pradesh and perhaps in India.

It is one of the foremost research oriented libraries of Andhra Pradesh. This library founded by Late V.V.Shreshti in 1918 had the rare privilege and good fortune of its foundation stone being laid by The Father of the Nation MAHATMA GANDHI in 1929. In 1935, Babu Rajendra Prasad visited the Library and blessed it. The buildings were opened by Seth Jamnalal Bajaj and Shri Tanguturi Prakasam. It has been the fountain of inspiration to the youth during the freedom struggle. Successive Chief Ministers and great scholars visited the library and paid encomia.

Today, the Library has a huge collection of books, newspapers (some dating back to 1909), periodicals - some 70,000 volumes on its racks - most of them, rare items. Research scholars from India and abroad (USA, Japan, Australia) stayed here and utilized the library resources in their research projects.

The library has played an active role in the lives of people around. It has been th ecenter of many movements in education and social welfare. The library is open to all and the staff is friendly.

As with any library, it has growing pains. The library grew from a small one storey building to the current two storeys. The papers keep coming every day and so do the new books. Cataloguing them, arranging them, retrieving them needs a lot of additional help. The library also needs help in preserving the age-old paper material from disintegrating. The library has plans to revamp to gear upto the magnitude of the challenge. The resources required to meet the challenge are put together below in the form of a report.

At present the Institution has Reserve Fund of Rs.1,60,000. While the interest yield from this fund is Rs.1,600 per month, the actual monthly salaries and other overheads add upto Rs.6000. This can be met with a reserve fund of Rs.6,00,000.

Purchase of new books at the present rates in turning out to be a Herculean task. A mere addition 200 books per annum means on expenditure of Rs.30,000 Subscriptions to magazines and dailies would entail a further expendituren of Rs.20,000. A recurring grant of Rs.50,000 per annum would be required.